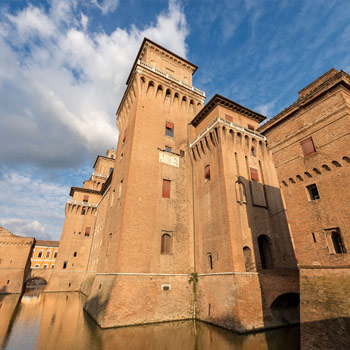 The Estense Castle is one of the major tourist attractions, historical, architectural and artistic heritage of the city of Ferrara. Our shop, Ferrara Store, is located only a few hundred metres from the Estense Castle, and then , after visiting the Castello Estense , we are waiting for you to discover our local products but we are also here to provide you with our bike rental service and to advise you on the best tour to do in our beautiful city.

The construction of the Estense Castle began in 1385 by the will of the Marquis Nicholas II, as a result of the popular revolt that flared up in the city after the tax increase imposed by the Marquis himself. The Marquis Nicholas II decided to build an inexpugnable castle in Ferrara that could stand as a symbol of power to his subjects and to any enemies; the building of the Estense Castle began on 29 September  1385, the day of St. Michael, protector of fortresses and strongholds.

The construction of the Castello Estense in Ferrara was entrusted to the architect of the court, and military engineer, Bartolino Ploti da Novara . Bartolino da Novara placed the Estense Castle close to the northern defensive walls of the city and designed it in the shape of quadrangle. For the construction of the quadrilateral reference, Bartolino da Novara  added three more towers to the existing Tower of Lions (now tower of St. Michael the Archangel), to complete the angles of the quadrilateral: the Marchesana Tower , St. Paul's Tower and St. Catherine’s Tower; the four towers were united by walls decorated with battlements above protruding corbels at their tops. The whole structure of the Estense Castle in Ferrara was secured thanks to the outer moat, the only access to the construction consisting of four doors with drawbridges.

The Castello Estense became the residence of the court only in 1476 because of the threats of Nicolò, son of Leonello d' Este, who tried to overthrow Ercole I. On this occasion, Eleanor of Aragon, wife of Ercole I , was forced to leave the Duke Palace, then the residence of the court, with the infant son, and take refuge in the Castello Estense , a building much safer than the Palazzo Ducale and easily accessible through the Covered Street , a gallery designed to link the Palazzo Ducale to the Estense Castle.

The choice of the Estense Castle as residence of the court will be later confirmed by Alfonso I, who moved within the walls of the Castello Estense before becoming Duke in 1505: in 1507, he began a massive restoration operation of the Covered Street annexed to the Castello Estense , which will end only in 1518, in which he built his private quarters among which the famous Alabaster Chambers, rooms designated as such by the precious works of prominent artists of the period within them.

It was during the kingdoms of Hercules II (1534-1559) and Alfonso II (1559-1597) that the Estense Castle turned from residence of the court to princely palace. The fire that broke out between the walls of the Castello Estense in 1554, which brought about severe damage to the building , also offered a chance to the  Este family to restore the Castle of Ferrara and to make substantial changes to its structure. The architect and painter Girolamo Stellari da Carpi, already at the service of Cardinal Ippolito II d'Este in Rome, was assigned this intervention. Girolamo da Carpi gave impetus to the previous structure of the Estense Castle , builing the turrets clearly inspired by Bramante on top of the towers and replacing the outmoded blackbirds that adorned the wall curtains with a fine marble balustrade; Girolamo da Carpi was responsible also for the construction of the spiral staircase for the horses in the yard. Following the death of Girolamo da Carpi in 1556, the renovation of the Estense Castle in Ferrara was completed by the architect Alberto Schiatti.

The decoration of most of the interior of the Estense Castle in Ferrara is due to Alfonso II d'Este, the fifth and last Duke of Este, since he left no heir after his death in 1597. This moment marks the beginning of the decline of the Este Family, resulting in the annexation of Ferrara to the Papal States and the consequent expulsion of the court in the province of Modena: the province of Ferrara then passes from flourishing duchy to marginal province of the Papal States. The Estense Castle, the symbol of the city and hub of all its activities, will become residence of the Cardinal Legates , and will not undergo renovations and improvements noteworthy for centuries.