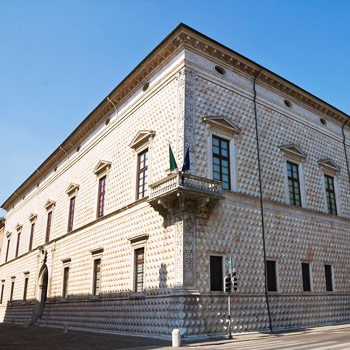 To understand the historical and artistic importance of the Palazzo dei Diamanti is necessary to refer to the urban renewal that took place during the late fifteenth century in Ferrara.

In 1484 Ercole I d'Este, after the war with Venice, decided to strengthen the walls of the city, entrusting the project to Biagio Rossetti (1447-1516), architect and great town planner, who also re-designed the urban fabric of the downtown, giving rise to what is called the Herculean Addition, an urban project that will take place from 1492 to 1510.

The intersection of these two new arteries of the city center have given rise to the Crossroads of the Angels, in whose corners are located today three wonderful buildings promoted by the Este dynasty:

The Palazzo dei Diamanti takes its name from the ashlar outside its walls, consisting of eight thousand five hundred blocks of white marble veined in pink, pointed faceted like the precious stone from which it takes its name: the diamond.

Gabriele Frisoni also worked on the grotesque candelabra with plant motifs in the corners of the Palazzo dei Diamanti, connecting elements between the various rows of small pyramids. 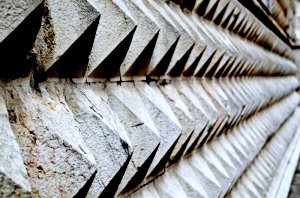 Inside the Palazzo dei Diamanti, which is arranged in a horseshoe shaped plan, there is a cloister at the center of which a well of marble was placed, typical element of the cloisters built during the Renaissance in Ferrara.

Since 1842, the Palazzo dei Diamanti is owned by the Municipality of Ferrara, purchased to become the home of the Art Gallery and of the University of the city, as well as to set up important art exhibitions that attract visitors from around the world.