The walls of Ferrara 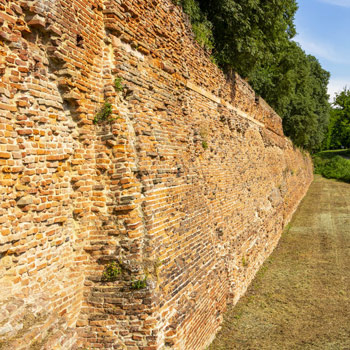 The visit of the Walls of Ferrara, a rare surviving example of almost intact city walls, is ideal for those who want to find out how ​​the old city walls and ramparts were made and see the various outposts, joining the sightseeing to the chance to be surrounded by nature, following a journey of nine miles, on foot or by bicycle, which will allow you to enjoy the best view of Ferrara. At Ferrara Store you can easily find bicycle rental for your trip; we can also show you how to get to the Walls of Ferrara, a must in your tourist itinerary in Ferrara.

The construction of the Ferrararesi Walls dates back to four different historical periods:

Arriving at the end of Corso Porta Po you’ll find access to the Ferraresi Walls, a nine-kilometer path on an embankment planted with trees, giving you the chance to admire the extraordinarily preserved walls and to have a fantastic view of Ferrara by bicycle. Starting the path, after an initial section damaged by bombing during the Second World War, you will find yourself admiring the section from the tower of the Barco to the Tower of St. John the walls, the walls of Ferrara erected by Ercole I d'Este, in which you can see the defensive system of the city, consisting of short sections of curtain wall reinforced for artillery shells, interspersed with semi-circular bastions, which are ideal for crossfire towards the enemy.

After the Tower of St. John, following the route of the Ferraresi Walls, you’ll pass eight bastions and, at the end, the Gate of Angels. In the next section of the Este walls, still a Rossetti design, you will encounter the Montagnola, a strategic 12-gun emplacements, of which the remains are still visible today. This point of the Ferrararesi Walls is particularly striking: looking towards the town you can see the Certosa, the Jewish cemetery and the vegetable gardens; on the other side of the wall you can see the area of ​​Barco, a former hunting reserve of the Este family and today Bassani Park , a lush, green part of the city of Ferrara. The Walls of Ferrara designed by Rossetti continue until the tower of San Giovanni Battista, built to protect the Porta San Giovanni Battista, now destroyed.

From this point on, the Ferraresi Walls you encounter will be those required by Alfonso I d'Este, a skilled strategist and an expert in artillery, who will modify the structure of the semi-circular bastions to a triangle with sunken sides, form called "ace of spades" . This section of the Walls was equipped with ramparts of this form to permit the hoisting of artillery over the construction, so that riflemen could shoot grazing the wall structure.

Collapsed the ramparts of St. Benedict and St. Roch, the last bastion of this type is only the one of the Mountain.

The Walls of Ferrara continue beyond with the section built by will of Alfonso II d'Este, where you can admire Porta Romana or of Saint George, which was the main southeast entrance to the city. Alfonso II d'Este also reinforced the walls erected by Borso d'Este in the southern part of the city, and ordered Aleotti the construction of the pike shaped ramparts.

With the annexation of the Duchy to the Papal States between 1608 and 1618, Pope Paul V had the Este Belvedere building destroyed to build in its place a pentagonal citadel, which was as well destroyed after the union of Italy, leaving a gap in the south west continuity of the walls. The tour of the Ferraresi Walls ends at Porta Paola, another Aleotti design, built in 1612.

Ferrara Store offers you a very efficient staff, willing to point you to the major attractions of the city of Ferrara that you cannot miss during your tour of the city, such as the Estense Castle, the Diamond Palace and the Walls of Ferrara.

The territory of Ferrara, in addition to art and history, offers you traditional foods of the highest quality like pampepato, the wine of the eliceo forest, the garlic of Voghiera, the coppia ferrarese, the pumpkin flatbread, the pumpkin cappellacci and the salama da sugo; you can find all these products in our store, we ensure the best typical products of Ferrara that you can find in our city.