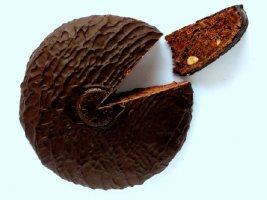 Among the typical desserts of the city of Ferrara, the pampepato or pampapato, certainly plays a leading role for its antiquity and its history.
Ferrara Store offers you a pampepato of highest quality, choosing the best pampepato in the province of Ferrara, for the ingredients used in its production and for its organoleptic qualities.

In all likelihood the birth of pampepato Ferrara is due to the custom of the twelfth century to prepare the "enriched bread" for Christmas, special breads made ​​from flour, water, dried fruit and spices, ideal for the period of advent because, not being rich in fat, they could be consumed even in the days when you could not eat meat.
The origin of the name of pampepato is controversial but most likely the pampapato of Ferrara has taken its name after the devolution of Ferrara to the Church state, and, in honor of the Pope, pampapato or pampepato would mean "bread of the pope."
Another version instead tends to associate the name of pampepato with the spices which originally composed it: dividing the name in pan "pepato" (“spiced”) in fact we would have confirmation of this theory. 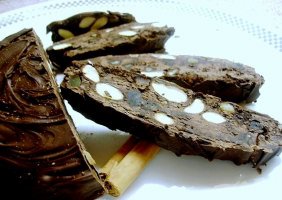 We invite you to visit us in Ferrara Store: you will find a welcoming environment in which you can choose with care between the various typical foods of Ferrara and where you can find the salama da sugo, the pumpkin cappellacci, the garlic of Voghiera, the pampapato, the wine of the Eliceo forest, the coppia ferrarese and the pumpkin flatbread. If you could not come and visit us in person, you can buy our products in our online shop by clicking here.